Something happened about last week that really bothers me, I’ve been thinking a lot about it, I even spoke to Tammi and Shay about what happened.

It was on Twitter, of course, you knew that was coming, either that platform or Facebook. This time it was the bird, and it was Dean Cain.

There is this website called Cameo, you can request a video from a celebrity or receive a chat from them. Are you with me so far?

Well, Dean is on this and on his profile, at that time, it said you could receive a video or a chat. That is important information.

So a woman on Twitter, I’m not going to say her name because she has had a lot of vitriol thrown at her this past week, posted she had paid for a chat, she called it a DM, same thing. She had paid for it and never received it, she tweeted it because she wanted Dean to know that this company was charging people and not delivering.

He does business with them and he does need to know that, I would want to know if it were me.

People are paying for things and they are not delivering on them.

Well, Dean comes back with, there is no DM, basically called her a liar and then told her to quit playing the victim. I was beyond shocked by this and even more shocked at what happened next.

There is a woman that is his ardent supporter, she posts throwback things all of the time and supports anything he does. Not a bad thing, you just need to know this for context, she posts a screenshot of the Cameo page that is Dean Cain’s and it say clearly has video and chat options.

I thought ok, this is it, he is going to apologize and say you know what let me look into this because I never agreed to a chat option.

I waited days to see this, all the while this woman is getting trashed and he is allowing it. No, he can’t control what others do, but he could have put a stop to it by simply acknowledging that he had been mistaken.

He didn’t, at all, I even asked the woman, did he apologize and I missed it?

No, he did not, and some of these women are vicious in their attacks. It is both sad and disgusting.   I would like to say I have never seen anything like it, but that would be a lie.  The vitriol spewed at this woman was incredibly sickening, these women should be ashamed of themselves, but they are not and never will be.

So here I sit, disappointed, not disillusioned, because after all, Dean Cain is human. Humans are fallible, they are at times maddening, mistaken and incapable of saying mea culpa.

I hope the woman this happened to realizes that these women were never her friends. They are simply on twitter to follow Dean Cain and come to the rescue when said actor is “attacked”.

She didn’t attack him for the record, she stated a fact.

I am going to put screen shots of what his page on Cameo looked like as of four days ago and what it looks like now.

Apparently he did tell them to take off the chat option, but it was clearly there before.

This does not lessen my enjoyment of Lois and Clark, I have it on right now, it does shine a different kind of light on the actor. Like I said, he is human, that is the long and short of it, humans make mistakes, humans don’t apologize for their wrongs and maybe fans of actors and actresses everywhere should realize that even when they play a superhero, they really aren’t the character they play on television.

Have a great day, remember kindness and humility go a long way.

As many of you know the beginning of August is never easy for me, the next few days will be a little rough.

As usual any comments, questions or criticisms can be left here or sent to me at angie@angieworld.com. Oh any vitriol will not be published, this is, after all, my world. 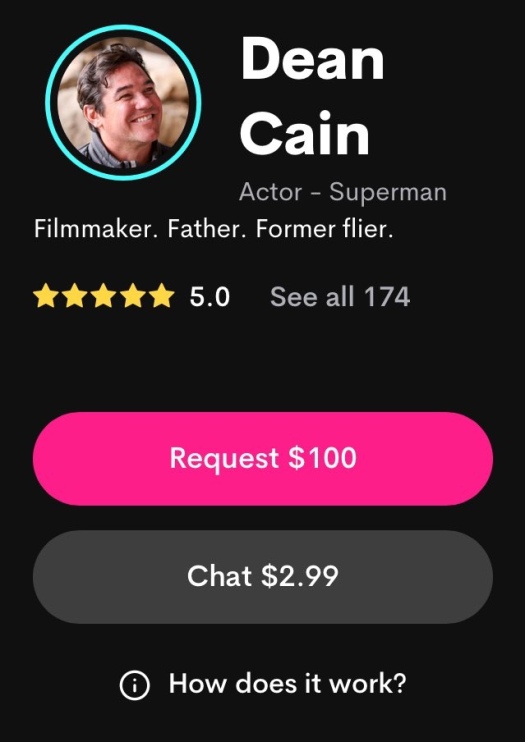